Dr. Renae Thomas is an expert in Evidence Based Nutrition. She’s also a medical doctor in Loma Linda, California, one of the worlds four “Blue Zones” where people live unnaturally long, healthy lives.

Listen in as Dr. Thomas debunks some popular misconceptions about health and nutrition, and gives us practical ways of understanding the latest in nutritional research.

***Find out more about Dr. Renae Thomas as a lifestyle medicine doctor on her Youtube channel!***


What is evidence based nutrition?

Evidence based nutrition, as it’s fundamental definition, means nutrition that has been replicated, well researched, critically analyzed by rigor scientific method. Statistical analysis, and repeated, at least on a large scale, by numerous people over numerous years. Accepted as the best quality evidence we have right now of the foods we consume and don’t consume. That which optimize health, whether that be preventing, managing, reversing disease, or living as long and healthy as we can.

These has taken hundreds of thousands of people over 10-20 years really looking over what they eat. As well as what diseases they develop, and how well they’re living. Those studies collaborated into these systematic reviews and analysis to try and make guidelines about nutrition. These guidelines are incorporated into World Health Organization, continuous update project on cancer. And other strongly respected and regarded high quality evidence pieces.

I use these step to interpret the evidence and how to know what to take from it, so I ask questions like: is this biologically plausible and does this make any sense? And if it doesn’t, why not? And can I learn more about it? Has this been replicated? Is this industry funded? and if it is, what’s their scientific method? Is this rigorous or did they skip over a couple of things? Who’s making money out of this? Is their publication biased?

No journal in the world is going to publish consistently negative results. But that skews the research because we are only seeing positive results and it kind of doesn’t answer the question, ‘what doesn’t work’?

The American college of lifestyle medicine is trying to push forward that all the evidence we’re putting out there are purely reviewed, published information. They benefit your health, and should really be seeing as equal to other specialties in medicine. We need more recognition on evidence based nutrition as the typical medical studies that we are familiar with.

***Did you know Mimi’s Miracle Turmeric is the only Turmeric Supplement on Amazon with clinical studies to back it up? Check it out on Amazon.***


Listen to the entire interview with Dr. Renae Thomas here:


What are the current findings?

In recent years, people are going more plant based, some are going organic, and eating grass fed. They are focusing on low chemical intake, and eating more fruits and vegetables. I’ve been very involved in the plant based movement. I think the China study is one body of evidence that has probably led to a lot of other great research.

Adventists, for example, are considered health conscious compared to the average American. They predominantly have good rest, and good physical activity. Most don’t have caffeine, alcohol, nor smoke cigarettes. So you really set up a good control study that removes a lot of those confounding factors of poor health. Which ometimes  influence studies on nutrition.

The difference in the Adventist population, among other consistent factors, is the level of animal products and dairy products they consume. But this is much less than the average American. It’s about 4 to 10% meat and about 10 to 12% dairy, and that came down to about three 1 oz servings of meat per week. That’s why the Adventist population, as a whole, lives 10 years longer than the average American.

That population seems to add extra health and longevity to their life. They had further reductions in chronic diseases like a lot of cancers, diabetes, obesity, auto immune conditions, and heart disease. So if you want another 5, 7, 10 years of life, that’s when you move into the plant based or the vegetarian, or vegan. 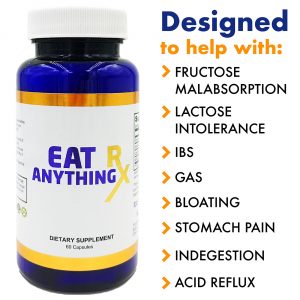 *******Our phenomenal product Eat Anything Rx is designed to aid people with digestive problems, to, well, eat anything! To find out more about it click here.*******

Based on my experience at places like True North health center, and Physicians Committee for Responsible Medicine,  all are working with whole food, plant based nutritional patterns and water fasting. I have also worked with Dr. John McDougall and experienced the same.


Seeing the results with my own patients or other’s patients, people dramatically get well just by changing what they’re eating. Again this is evidence based nutrition.


It’s also interesting to talk about the blue zones’ Power 9. The ‘9 key principles’ found to be fairly consistent throughout all the blue zones. They are:

It’s important to point out that only two of the power ‘9 key principles’ is about nutrition. And I think that nutrition is so important, but it can be underrated.

I’m passionate about the evidence based nutrition, the results, from predominantly plant-based nutritional patterns. You’ll never know what’s going to happen in life. Putting that in the perspective of living your greatest life, I think we have to live life to the full. Be mindful of the power of nutrition and lifestyle, but not having that as the sole focus in life.


*****Speaking of evidence based nutrition, check out Dirobi UnDiet, which is based on a few basic, easy to follow principles for rapid weight loss.*****


Are there some things that surprise you about nutritional research currently?

Yes, we often miss the point of nutrition when we focus down on macro nutrients. For example, one chicken breast is approximately the same protein as one head of broccoli. So it’s actually not necessarily a huge change in the macro-nutrient composition.

To a more plant based diet, it typically does lower the fat, but most specifically the saturated fat and cholesterol that tend to be more concentrated on animal products. That in turn does mean your fiber and carbohydrate content may be a little higher.

There are people that are thriving on plant based nutritional patterns and they are not necessarily higher in carbohydrates. It’s the fiber that increases, but the saturated fat and cholesterol tends to go down. Think more of the nutritional content as a whole, rather than focusing on numbers and macro-nutrient composition in general. 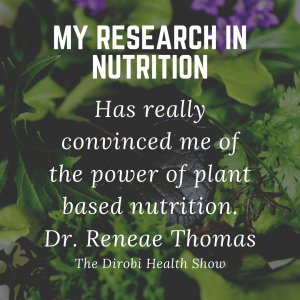 Also a lot of people have accepted the evidence that we should reduce red meat. Therefore have gone on craziness of consuming chicken at every meal. We now know that chicken is almost the number one source of cholesterol because it replaced a lot of the other foods.

I think that chicken is probably slightly less bad than the red meat. I put meat in the less than 5 to 10% of any nutritional pattern regardless of the source, whether it’s red meat fish, turkey, chicken, any of those.

Another one is fish. I think that the fish itself may have been more nutritious at one point. I listened to a lot of stuff from Dr Zach Bush and really learning about the toxicity. Not just the heavy metals, also the fact that almost all water sources is contaminated with contraceptive pills and antibiotics. 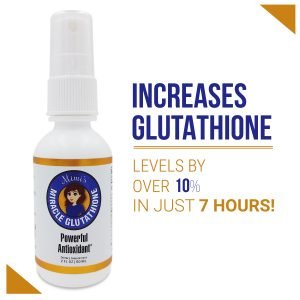 That makes me very paranoid to think what has bio accumulated into the fish flesh. I don’t think we have enough evidence to say that fish is a safe food to consume on a regular basis at this stage.


***Factoid: Glutathione is an antioxidant molecule that removes toxins such as free radicals, heavy metals and peroxides from our cells to prevent oxidative damage and cellular stress? Our Mimi’s Miracle Glutathione features the highest potency available in a spray format! More details here.***

What are the top simple, practical take-away my audience ought to know about evidence based nutrition?

The big part of what I like to talk about plant based nutrition is, there is such a huge spectrum within that. I think it’s about finding what you like or what foods you like. So let’s look at how you’re eating. What do you now enjoy for breakfast?

For example, if someone is eating one of those alphabet, multicolored cereal, let’s make the transition to a shredded wheat. Then switch up your cow’s milk for an almond milk, or non-dairy substitute. That still has the identical convenience factor that you’re used to, and you’re still basically doing the same thing.

You can also pour berries, or a handful of walnuts, flax seeds and chia seeds, and you’ve got yourself a pretty solid healthy breakfast. You’re having a bowl of cereal and milk, but you’ve already made a health goal change.

If you are more of an eggs and bacon type person, you can switch to scrambled tofu instead. If you’re not ready for that change yet, maybe chuck in some spinach, tomatoes, sweet pea, or leftover sweet potato into your eggs. Instead of having four eggs, have two eggs. Then add some baked beans on the side, and grilled vegetables.

Add the nutrition to move away from where you are before. But still keeping it to be similar, enjoyable and not completely foreign to what you’re typically used to do.

Do something similar for lunch and dinner. Again same pattern that makes for healthier choices. Going back to the power 9 is to share dinner with people, connect with your loved ones, take time to sit down, relax, debrief, and have an enjoyable evening.

As for the basics of getting all your healthy foods on a plate for portion control, say half the plate would be fruits and vegetables. One quarter would be some whole grain, and one quarter would be beans, legumes, split peas, lentils, chickpeas, etc. Then make a dressing sauce or flavoring with some nuts and seeds. That’s typically a really good pattern for all meals. 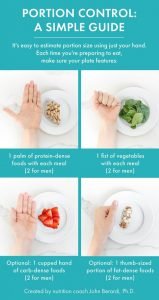 It’s great to be aware and not be naive because we have a lot of evidence based nutrition. Know that nothing is perfect so don’t be too hard on yourself. People get very overwhelmed that it almost seems too difficult to make changes.

That’s why I like to talk about the spectrum of health and just thinking, where are you at, and what’s doable for you. What feels exciting and what feels fun. You want your life to be as enjoyable as possible and health is just one part of it.

It would be immoral of me as a medical doctor to say that what you eat doesn’t matter, that the amount that you exercise doesn’t matter. That all these pillars of health don’t matter, and just be happy.

Well, that’s completely false. But it is feeding it into the bigger picture. Knowing the power, the evidence, and then being able to make the choices in a way that will make you happy. I think it’s kinda the key message.

Happiness is really the key to all of life. So just by doing whatever makes us happiest and healthiest and feel our best is how I would approach life.

Other related articles:
The Dirty Dozen – 12 Veggies Worth Buying Organic & 15 That Are Not
On Phytonutrients and Eating Rainbows
The Dirobi Undiet
Power Nine