“If you could live longer with the same mental and physical capacity that you have today, would you want to?” Almost all of us would say yes. Longevity is one of the most important aspects of health, especially as we get older. The value of aesthetics like being “buff” or having a toned stomach drops way down. Instead, we are interested in living a long, pain-free, healthy life with energy.

Chris Burres is a pioneer in the field of health and a leading expert on the Nobel Prize-winning molecule, ESS60. This molecule has been shown to boost longevity by up to 90% in test subjects. When Chris learned this he made it his mission to provide the world’s first nano antioxidant and anti-inflammatory supplement to people around the world. In addition to expanding longevity, ESS60 has been shown to have other benefits including a lower risk of heart disease, better vision, improved mental function, lower blood pressure, managing osteoarthritis, increasing strength & vitality, protecting the nervous system, and more. Click below to hear Chris share more about this fascinating discovery, or you can read our highlights!

How did you develop your own philosophy of health? 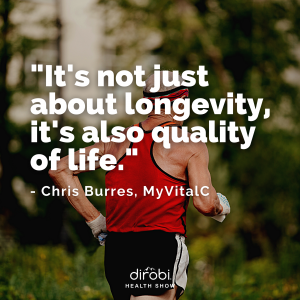 My father was in the Air Force, so we moved often- every two years. A lot of military brats will agree that moving every two years can give you the ability to make friends very quickly and get along with almost anyone. I look back fondly at those moves as it really brought our family closer. My mother was an aerobics instructor at one point, so health and wellness were all around me. I remember jogging with them regularly and playing recreational sports while growing up, so activity was always important.

My mother described her foray into aerobics instruction as her “last hurrah” but she was only 40. I found this so interesting, because you don’t have to stop at 40. Thankfully, the mindset these days is shifting and there is constantly new information coming out. There is an amazing book by Dr. Sinclair called Lifespan that looks into 25 years of research on extending the life of animals and people. Dr. Steven Gundry wrote a book called The Longevity Paradox and a quote from it that I love is, “I want you to die young at a ripe age.” That is a great way to look at health! The premise is that we’re approaching a point where we will no longer die of old age. We know healthy things like a good diet and exercise can extend your life. Maybe that extra few years could be enough to get you to that point.

What’s with this study I keep hearing about?

In 2012, doctors at the University of Paris did a toxicity study with the molecule ESS60, a consumption-safe version of C60. They gave one group of rats water, one group olive oil, and one group olive oil with the molecule ESS60. It was supposed to be a toxicity study, because they thought that the molecule would be toxic. But the rats that they gave the formula (the same formula for MyVitalC) lived 90% longer than the control group. This peer-reviewed and published research is the single longest longevity result in experimentation on mammals ever! 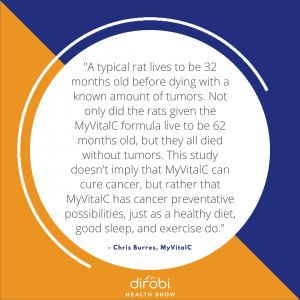 If you’re performing a toxicity study and your control group dies first, your study is over. If the group that was supposed to die more quickly continues to live for almost twice as long, you’ll be pretty confident that the substance is not toxic. They actually euthanized the last rat because the study was supposed to end years earlier, so theoretically that rat could have lived even longer.

Were there any other benefits?

A typical Wistar (lab) rat lives to be 32 months old and dies with a known amount of tumors. Each day they live their tumor mass increases. Not only did the rats given the MyVitalC formula live to be 62 months, almost twice as long, but they all died without those tumors. This does not mean that MyVitalC will cure cancer. There’s a huge difference between a cancer that has metastasized, versus something being cancer-preventative. The study implies that MyVitalC has cancer preventative possibilities, just as a healthy diet, good sleep, and exercise do.

Why are so many studies done on rats?

It’s simple! Rats and mice are genetically very similar to humans. Their biology, genetics, and even behaviors resemble that of people, so many conditions can be replicated and tested on rats and mice. They’re also small so they don’t require a very large living area like other animals might.

Why put ESS60 in oil? Why not a little pill?

Going back to the original research, they started by performing multiple tests with C60 looking for toxic forms of consumption. For example, they would have the rats breathe it in to see if it had any asbestos-like qualities, but the rats would just excrete it. With that research, they found that C60 isn’t water soluble like most supplements, but it is fat soluble. In the Paris rat study, they stirred the mixture for two weeks and recorded the concentration at .8 mg per mL in olive oil. All sorts of companies tried to follow that protocol, thinking that the concentration would stay the same for different solutions and amounts. 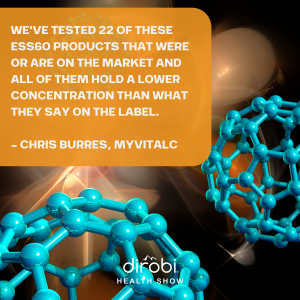 One of the original companies that tried to sell this as a supplement used MCT oil. MCT oil itself is fine, but it can only hold .3 – .35 mg per mL. The company didn’t know this, they didn’t have the equipment to test it themselves, and they didn’t send it to another location to have it tested. They assumed that everything would stay the same, so they put .8 mL on the label. We test our batches multiple times in-house, so we also discovered that two weeks of stirring is not enough for larger vat sizes. We’ve tested 22 of these products that were or are on the market and all of them hold a lower concentration than what they say on the label.

How do I know if a supplement company is legitimate?

Scammy supplement sellers can run a phenomenal campaign for a mediocre product, make a lot of money very quickly, then take off. A big red flag is if the company is only offering a way to buy the product on their website, but it’s hard to actually get ahold of the company, if you can at all. Often they’ll put you on an auto-ship without your knowledge, roping you into giving them more money for something you haven’t even tried yet. If you see advertisements for a supplement company you haven’t heard of, do some research to make sure they’re an actual company. If their only outlet is Amazon and they don’t have a website, they’re often just trying to make a quick buck from selling on Amazon before they get shut down.

Why shouldn’t I shop for supplements on Amazon?

Amazon is great, but you don’t want to buy a supplement there. Most supplements don’t make you feel better immediately, they take time. If you see a 5-star rating for a Vitamin C tablet, what does that mean? We know it doesn’t mean that they weighed the tablet and tested it in their own lab, because almost nobody has a lab at their disposal. Most of the supplements out there have a 5-star rating because the shipping was fast and the product didn’t bother them when they took it. 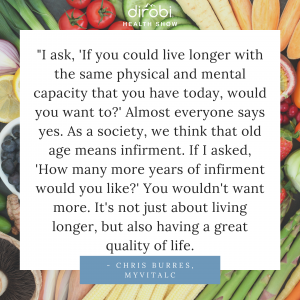 You’re getting the opinion of someone who doesn’t have the equipment to test it, doesn’t have the scientific background to understand the value or how it works, doesn’t understand the necessity, etc. Amazon has improved their supplement area significantly, however reviews aren’t the best source of information there. Especially multivitamins! You won’t really feel the difference a week later, but in five years you’ll feel so much better. Those people won’t come back and update the review five years later when it’s really showing those benefits.