Dr. David Rendelstein is a leading expert in the weight loss field, but more than that – he is a living testimony to the success of weight loss through lifestyle change. He lost over 100 pounds in 6 months with the same method he now uses to help clients lose the weight they have been battling for years. As a trained chiropractor and the owner of ThinTech, Dr. Rendelstein has extensive experience in helping people finally achieve lasting weight loss and improved quality of life. After helping thousands of people put themselves first, he realized that when you positively affect your health it creates a ripple effect on all areas of your life. He is on a mission to help people live a happy, healthy, and hopeful life. Click below to take a listen, or keep reading!

What’s the story behind your weight loss?

I grew up in New York with a family of eaters. If we were sad we ate, if we were happy we ate, if we were angry we ate… So we ate a lot. At various times I would lose weight, like in high school when I played football or basketball. I would get into shape but always gain the weight back after the season ended.

Fast forward to when I decided to go to chiropractic school. By this time I had lost a bunch of weight, I was vegan, and I was running in Central Park every day. Everything was going great, but then I had a really difficult break up with a girlfriend. 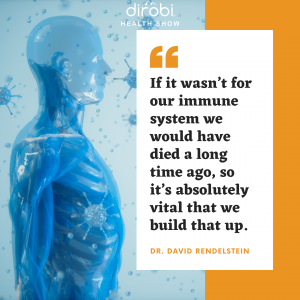 We joke about how people a bad breakup will have you eating ice cream on the couch immediately. And it will! I stopped exercising, started eating a lot of processed foods, and gained a lot of weight. I expected to be able to just lose the weight like I did when I was younger but nothing was working for me. One day I was at a seminar with a bunch of other chiropractors. I went to school with one of them, and he was a pretty overweight guy. Now the roles had switched, he was really healthy and I was overweight. I asked a mutual friend what he did, and I found out there was a weight loss protocol everyone was trying. I tried it, not expecting much, and ended up losing 100 pounds.

Why should we be strengthening our immune systems?

It’s a very topical subject right now while we’re faced with this pandemic. It feels like it’s hitting our country a lot harder than others. I hope people understand that it’s not just about the virus, but about us and our health. We know that most of the people who die from COVID-19 have 2.6 co-morbidities. We know that if you’re obese or have lung/heart issues it can be serious. There are a lot of people saying that we need a vaccine, but far fewer people saying that we need to strengthen our immune systems. If it wasn’t for our immune system we would have died a long time ago, so it’s absolutely vital that we build that up.

Why should we take control of our health?

As individuals and as a country, we’ve handed the responsibility of our health over to doctors and professionals, when it’s not supposed to be their responsibility. We want to live the way we want to and hope that we can be saved by someone in a white coat. Just because they have that white coat, doesn’t mean we should be handing over our health to them. We need to start changing that attitude and taking responsibility for ourselves. It’s always been up to us, but we’ve forgotten that and turned it over to our medical system. Our medical system isn’t based on building health but suppressing the symptoms of ill health.

What are some common myths surrounding weight loss? 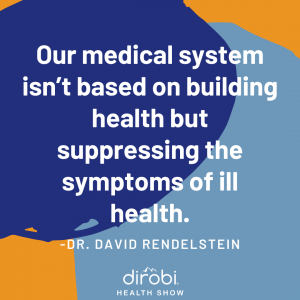 The biggest one would be that weight loss and health are separate, or that weight loss will lead to health. The better way to look at it is that being overweight is a symptom of ill health. We’re so used to the calories in calories out model.All things being equal that would be true, but the big “however” is your engine. We know about the fuel, all the focus is on the fuel. If you have a Ferrari or a Maserati but the engine doesn’t work, it doesn’t matter if you put the best fuel in the world in there, it won’t fix that engine. If I were to look at a car engine and I saw it was full of rust and gunk around it, I would know that’s a problem. There are a number of things that will affect your engine, and we need to be able to address those things first, not just the fuel.

How do you address the engine?

We want to address each factor that might be suppressing your metabolism, leading to weight loss resistance. One example I like to start with is hydration. As you know, when someone is hydrated they’ll have more energy, less joint pain, and their outlook is rosier. When it comes to metabolism the two biggest things are hormones and hydration. We’re made up of around 6 trillion cells, and each of them is like a little factory. They need certain things to function, like water. The cells are supposed to look like balloons but if they aren’t hydrated they look more like raisins. You can imagine they don’t function as well. 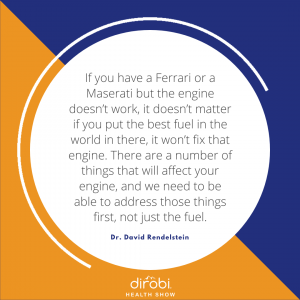 Most people are led to believe that they just need to drink a lot of water if they want to be hydrated. If you were a flower and you were given 17 gallons of water that wouldn’t be hydrating you. Hydration is a function of the absorption of water. In order for the water to be absorbed, you have to have the proper nutrients. Specifically, minerals. Minerals and electrolytes are foundational nutrients we all need. We cannot overcome a deficiency in minerals just by our own force of will. It’s vital that we get the proper minerals and electrolytes because that will allow our cells to properly absorb water. If we don’t have water, then the millions of chemical processes occurring in our body per second are slowed down.

How do you ensure someone is hydrated?

Fulvic acid is phenomenal at helping drive the fluids from the intracellular space into the cells where it can be used. Swelling or edema occurs when the body doesn’t properly absorb the water, so we try to get a broad range of different trace minerals and electrolytes which allow the water to move into the cells. We also use a great pink salt product. A lot of people are using sea salt. However, if the sea salt has been dried in an oven at 1700 degrees, they might be killing the nutrients and that salt might not be worth its salt!

We also detox. Just like you have to get the gunk out of an engine, we have to get the gunk out of the body. There are so many chemicals in everything around us these days. Many water bottles will say “BPA free” because we discovered that BPA leaks into the water and messes with our hormones. BPA isn’t the only hormone disruptor though, and these hormone disruptors are in everything from skincare to the ink on receipts.  So when we detox we also give them the knowledge to rid themselves of these chemicals that their body will absorb. When we detox the body we’re trying to drive a process called autophagy. When you’re in the state of autophagy your cells will eat the bad parts of the cells. This helps with weight loss, inflammation, etc. 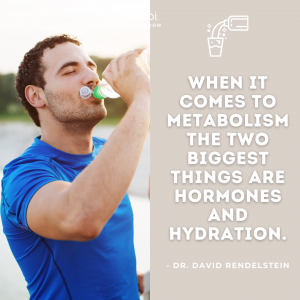 We like our clients to do something called grounding, which sounds too silly to do anything. Grounding is putting your bare feet on the earth for 20 minutes a day, ideally longer. A lot of this boils down to rewinding the clock and going back to nature, our world is so unnatural now. We weren’t always inside all day, we were outside getting vitamins and nutrients from the sun and the dirt and the air. I’m not totally anti-tech or anything, but there are consequences to trying to change our health and lifestyle habits so abruptly.