Dr. Jacoby is one of the country’s leading peripheral nerve surgeons, specializing in progressive damage to the nerves that often results from diabetes. He has treated thousands of patients with this condition over the years, and has successfully treated many patients who would have otherwise had to have an amputation. Through Dr. Jacoby’s clinical work, he “connected the dots” to discover how he could offer a unique, holistic approach to his patients to greatly improve their health and support the natural healing functions of the body. He is also the author of Sugar Crush, How to Reduce Inflammation, Reverse Nerve Damage, and Reclaim Good Health. In this episode we will discuss his findings and drill down to his key takeaways that we can all use to improve our health. Click below to listen, or keep scrolling to see our highlights!

How did you become an expert in diabetes?

While at podiatry school in Philadelphia I was in a work study program for Dr. Michael Creeth at the Ben Franklin Clinic. He was studying a fetal genetic disease there so I was able to learn from him both at work and at school lectures. It was a very valuable experience to have a one-on-one learning capability with a nobel laureate. 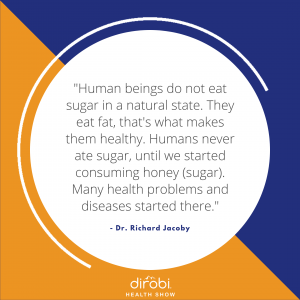 I was able to work with Dr. Lee Dellon, a professor of neurosurgery from Johns Hopkins as well. He created a new way to treat diabetic neuropathy and asked me to come train with him. I read over 85 textbooks and performed thousands of surgeries with him, all centered around diabetic patients. He was brilliant and taught me new ways of thinking and seeing.

In 1981 I was a surgeon and had quite a few patents on different medical devices. One of the nurses at the hospital was from Taiwan and a doctor she worked with there wanted to get these devices. He was the surgeon general in Taiwan, Dr. Lee Chu, and he was also interested in diabetes. He asked me if I would come to Taipei to look at the people in his country and see why they had diabetes. I asked him what they called diabetes in Mandarin, and he said they didn’t have one. They didn’t have a name for it because they didn’t need one. I spent three years there on and off doing research, and finally I could tell them that it was their diet. In 1979 the first fast food restaurant was built in Taipei. Already, they had an epidemic just two years later.

Diabetes is a Greek word that means “to siphon water out”. Diabetics hundreds of years ago would urinate frequently, and bees would buzz around it because the urine was sweeter. People would use medicines and natural herbs to reduce the levels of sugar in their urine. Now we have other methods of determining that someone’s body isn’t able to make or use insulin properly. 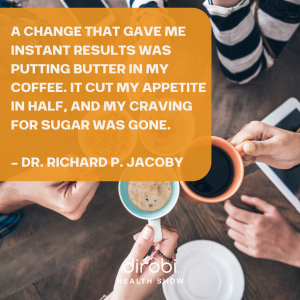 I’m often asked about the transition between surgery (diabetic neuropathy) and nutrition. But it is nutrition, it’s sugar! Human beings do not eat sugar in a natural state. They eat fat, that’s what makes them healthy. Humans never ate sugar, until we started consuming honey (sugar). Many health problems and diseases started there.

What is your hypothesis in Sugar Crush?

My hypothesis is that sugar causes nerve compression, ultimately blocking the blood supply to every nerve in your body. This causes inflammation and eventually some organs lose functions. It is best to stay away from all sugar, even that in fruits, whenever possible. Bananas originally tasted nothing like the bananas we know today. The bananas we eat now have been modified to make them taste sweeter, so we will like them more. So even a “healthy” food can still be full of sugar.

Really pay attention to your labels. There is more sugar in a yogurt cup with fruit in the bottom than there is in a Reese’s candy bar. Know what you’re eating so you don’t fool yourself into thinking you’re eating healthily. Learn how to read the label. Take the total carbohydrates and divide that number by 4 and you will get the number of teaspoons of sugar in that item. Steer yourself away from the sugar when possible, but when you want the sugary food have it and enjoy it.

What exactly can I eat?

There are two answers in my book, one by a nutritionist and one by myself. Personally, I say if it tastes good, don’t eat it because it probably has sugar in it. 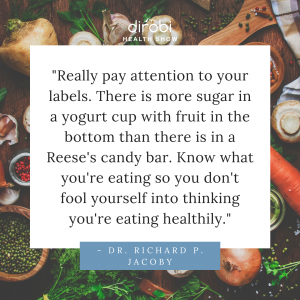 Most people will benefit from and enjoy a Mediterranean diet. The Mediterranean diet is a little more tolerable and flavorful. The Keto diet, on the other hand, usually means a fat-based diet. Little meat, and mostly fats. It works though, because you’re not hungry! It’s very helpful when you’re trying to lose weight. If you have a weight problem you need to be on keto until your weight isn’t an issue and then transition into a more Mediterranean diet. Both are based around less carbs and sugar, just in different ways.

One study that was influential for me involved the Maasai warriors in Africa. They drink the blood of their goats and feed the meat to their dogs instead of eating it themselves. They are extremely healthy and very fit. There was another study in Canada, where they found a group of trappers who were isolated all winter. They found them at the end of the winter with their kidneys shut down because they were only eating rabbits. They were getting enough protein, but the meat was too lean. The focus should be on getting enough fat rather than just protein.

Treats here and there aren’t the problem, but little treats can add up over time. Fructose interferes with your satiation hormones, meaning you’ll never feel truly satisfied after eating. Even if you’re stuffed! High fat diets help you feel satiated so you can actually mean it when you say you’re full. Plus, if you want to indulge every once in a while you won’t feel that “sugar crash” feeling afterwards. 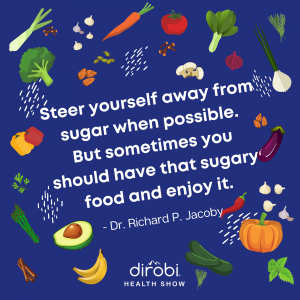 It’s important to pay attention to where your meat is coming from. Over 90% of the meat in the United States are being fed corn. Cows and pigs don’t like to eat corn, but that’s all they have to eat. These animals have to be grown and slaughtered quickly just to get any meat from them (because they won’t live that long). You can eat a lot of food that’s grass fed (butter, milk, etc) because those are natural foods. They’re raised in an environment that they would naturally enjoy.