When serial entrepreneur Don Brown sold Interactive Intelligence, the third software company he’d founded, for $1.4 billion in 2016, his kids begged him to retire. But Brown, now 65, says he knew he wasn’t done. He has gone on to found an Indianapolis-based cloud and mobile software company LifeOmic, which aims to reduce the time it takes for researchers to identify the problem with a medical patient. To add to LifeOmic, he added a health app called Life Extend, and is applying his resources to studying how to extend life, and improve the quality of life for humans like you and me. 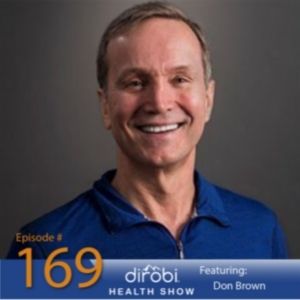 What was your life like while you were building 3 successful software companies?

I never sought out to be a software entrepreneur or a business person of any kind. I knew nothing of the business world. I was a physics major and really thought I would be a biomedical researcher. I’d figured I’d be working in a dingy basement lab for the rest of my life.

I then unexpectedly switched from biochemistry to computer science in the 1980’s, and I ended up falling in love with it.

When I was finishing up medical school I had a buddy who contacted me about writing some software for his car dealership, to compute finance payments, which I didn’t know anything about. I went to the library and got a book and wrote a little algorithm and one thing led to another. That eventually led to a company that was sold to EDS and General Motors. That was my first paystub success in this industry.

I turned around and did it again and started a second company called Software Artistry, using some of the work I did in grad school. That company became the first software company in the state of Indiana ever to go public and was acquired by IBM for a couple 100 million dollars.

I decided to leave and start another company called Interactive Intelligence and that’s the one that became the third software company in the state of Indiana ever to go public, which was in 1999. It was acquired in 2016 for 1.4 billion dollars.

How was your health journey during this time?

It was up and down. There were periods where I worked hard and stayed in shape, and other times where I was working 120 hour weeks.

I realized that I was waiting for something that is never going to come and I better start today, and prioritize these things.

That lit a fire under me and I started to exercise, lost some weight, felt better, and was more productive.

I just felt like something was left undone and I didn’t feel satisfied with that. When I was about 60 years old I told my kids I was going back to grad school for biotechnology and they were like, “Dad, why?”

That experience going back to school  rekindled my interest in life sciences so when I did have the big exit in 2016 I did two things. I gave 30 million dollars and gave it to my alma mater, the IE School of Medicine to start a new immunipro center for treating cancer. The second thing was that I started another company called Life Extend.

A lot of it is what our grandparents and our great grandparents knew and acted on more successfully than we do. Now we understand the scientific underpinnings but we’ve known for a long time about things like exercise, good nutrition, taking steps to relax, and even things like intermittent fasting. I remember we would have dinner and my grandmother would say that the kitchen is now closed. No snacking or nothing until breakfast tomorrow.

Even as kids we were doing 12 or so hours of intermittent fasting. It’s just that now we have a better understanding of the molecular mechanisms underlying these things.

** Prefer To Watch? Check Out Our Livestream On Living a Longer and Healthier life With Don Brown Here!**

How did you arrive with the 5 Principles of Health You’ve Chosen?

I had heard about caloric restriction years ago and the dramatic effects that it can have on increasing longevity and decreasing chronic diseases. I thought it was cool but thought that I could never eat 1,200 calories a day.

At Jobs Hopkins I came across a paper that you don’t have to have permanent caloric restriction but can do it periodically. I thought that was more practical for me. I ended up reading maybe 100 academic papers on it from then on. What was cool for me was that I could understand the molecular mechanism of it.

The 5 pillars of health really all started with intermittent fasting.

I shoot to do a 24 hour fast about once a week, which some people think is almost impossible. It’s really only skipping breakfast and lunch.

If you think about our ancestors, they had to do tremendous things like cross mountains, deserts, wars and they didn’t have an Egg McMuffin before they did it.

So much of it stems from this modern conception that we’re never supposed to be uncomfortable.

Be uncomfortable. Go hike and go take a run in the rain. If it’s snowing, go hike. Don’t just say, “Oh, it’s cold outside” and veg out with Netflix. Go do it. If you can, even go to altitude and do this. Take a sauna…All these little stresses are actually good for us. 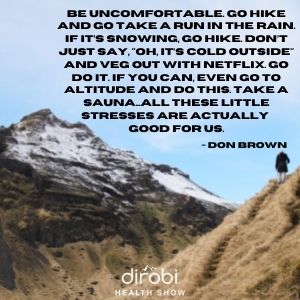 Even little psychological stressors we’re finding are good for us.

It’s comfort that kills us. This old notion that somebody at 65 should be on a rocking chair, on the porch watching the sunset. There’s no quicker way to make me die than to do that. We’re like sharks. We have to move and we have to be challenged. When we do that we’re so much better off. We’re happier and healthier.

We’re not going to tell you what not to do but what we are going to tell you to get 5 servings of healthy plants into your body everyday. If you do that, that will largely compensate for the less healthy things that you do.

You can continue to eat your cultural foods but have some green beans with it or some watermelon for dessert. It’s not that much of a hardship.

The first part of our business was building a cloud platform that could alligate all forms of health related data, especially for cancer patients. Then we decided we would build a wellness related mobile app. We were thinking we’d get 5 or 10, 000 people and get some nice low testing out of it.

Now it has over 3.5 million downloads which has brought a lot of low testing.

We’ve taken the combination of the cloud platform and the mobile app and used it as the next generation corporate wellness software as well as a personal health improvement subscription program.

In the subscription program we have you do the blood testing two different times.

A blood test can reveal things like your insulin level. When working to lose weight and be healthier your insulin level could be dropping because you’re improving your insulin sensitivity. You may start to see positive changes on the inside before you see them in the mirror or on the scale. That’s a tremendous psychological motivation for people. You will see it on the scale but sometimes there’s a little bit of a lag.

You shouldn’t make temporary changes. People need to make changes for life. Diets don’t work. We’ve seen this. Short term fixes don’t work. What works is to say, “I’m going to change my life. I’m going to start eating better and to really make those changes very gradually and incrementally.” The whole baby step approach. But not say, “I’m going to lose 50 lbs for a wedding in 3 months.” That’s doomed for failure. Figure out what you can do that you can maintain forever.

***Pounds and Inches Drops are formulated to help you lose weight… from the right places! Get it or learn more about it here.***

Why did you add meditation as one of the top things in your app?

My team and I personally led an investigation on all the literature we could find to try to identify the simplest practices that can improve health. Especially in our modern society, it’s so easy to get stressed out and stress is a bad thing. Cortisol is great when it does what it’s supposed to do but when it’s elevated all the time it inhibits repair. When it becomes chronic it’s extremely delegatory to our health. It makes it harder to lose weight, hurts our insulin sensitivity, and synergizes negatively with the other 4 health pillars.

You don’t have to go to India and become a Swami. You can just close your eyes and do deep breathing for 5 minutes. You can even start with 30 seconds. You don’t have to have any particular training or any expertise. The evidence is there that it works. It helps to try to reduce your stress levels in a complex society.

Meditation is just as important as the other 4 pillars.

The most powerful force in the universe isn’t love, isn’t gravity, it’s compound interest. It’s the little things that you do consistently, whether it’s putting some money into a savings account, or doing breathing exercises for 2 minutes every day. Do that over a period of time and you look back, and you go, “My gosh, what a difference it added up to. 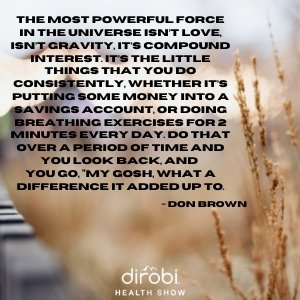 I’m passionate about trying to help reverse the situation we have in this country where we talk about healthcare, but it’s really a disease care.

Our behaviors have a bigger effect on our health than hospitals or doctors or the whole healthcare establishment.

What we do day to day can determine whether we suffer from Alzheimers, type 2 diabetes, or cancer.