When you hear the word “overachiever,” what’s the first name that comes to mind?

Elon Musk, Tom Hanks, or Michael Phelps? Or maybe your first thoughts took you to your neighbor across the street who always has the perfect lawn, wears size 2 jeans, and has a FaceBook page that looks like she doesn’t know what stress is.

Once in a while, however, we come across someone who has an unstoppable aura about them. They have an attitude of gratitude mixed with a love for people in general. This rare breed of individual competes more with his or her own self rather than comparing himself against the field.

From this day forward, the name “Brad Kearns” just might be emblazoned in your mind as that overachiever you want to remember–and even emulate for the rest of your life. As a New York Times best-selling author, Guinness World Record setting professional Speedgolfer, #1 ranked USA age 55-59 high jumper, former US national high-jump champion, and #3 world-ranked professional triathlete, Brad hosts the B.rad podcast to share his wisdom and humor with the rest of us!

Brad is an expert in healthy lifestyle, supplementation and the latest in longevity science. So what’s the train of thought these days?

*Keto is a fad that has gone astray. The original intent has been reduced to eating large amounts of meat and fat.

*Ancestral traditions even one generation ago taught the value of using all parts of animals we use for food.

*Modern science shows that organ meats have healthful benefits not found in other parts of animal proteins.

*Whether or not you believe in eating animal or plant proteins–or both–the healthiest way to longevity is clearly avoiding processed, refined foods and oils. (22:00)

*There are differing opinions concerning the healthfulness of eggs: Does dietary cholesterol really affect blood cholesterol? The experts now say no.

*No matter which healthy diet you choose, the bottom line is that elimination of processed food will elevate your body to a new level. 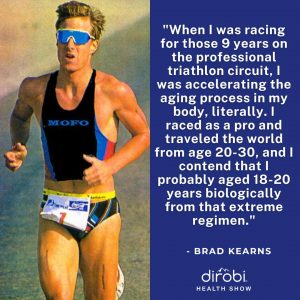 Western culture clearly has values that many would consider superficial, if not obsessive, in these Blue Zones. Physical appearance, wealth, power, and individual accomplishment are just a few of the trophies Americans are constantly competing for. Community purpose and the family unit have been losing support since the end of World War II.

*Obsession with physical fitness and appearance can actually compromise health. (26:00)

*Acceleration of aging occurs when we overdo exercise and training.

Brad confesses that he is now trying to “unwind” the damage that his lifestyle caused. Being uncommonly fit comes at a cost.

“I learned to go with the flow. I learned to take care of my body and skip a day of training and use that discipline…and here I am talking about how every single morning I start my day the exact same way.”

Brad uses a deliberate sequence of exercises that started small and simple, and evolved naturally over time. This morning routine started 5-1/2 years ago, and Brad hasn’t missed a day since. Here’s the gist: 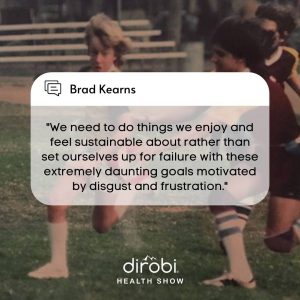 *Direct sun exposure in any season of the year, followed by a physical movement routine outdoors is how Brad begins each day. (Check out Bradkearns.com for a variety of workouts to choose from).

*Regardless of the level or time available for your morning routine, consistency is the key to the movement becoming a habit.

*The discipline found from using a morning routine often carries over into all other areas of your life.

*Setting the tone for each day by completing a morning routine first allows us to mindfully use technology during appropriate hours the rest of the day.

*Dave has incorporated device time with his intermittent fasting window, beginning at 10 or 11 am, and ending by 6:30 pm. Learning to not be a slave to technology is crucial to our growth.

Probing a little deeper into the mind of Brad Kearns revealed a few more ideas worth noting:

*Eating eggs from pasture raised chickens is healthy…”Eat all you want!”

*Those who reduce their consumed cholesterol amounts will replace it by internally producing their own.” (44:00)

*Eat the whole egg…not just the white. The yolk contains vital nutrients not found in other foods such as choline, and B vitamins. Brad cracks 3-4 raw eggs into his smoothies in the morning.

*Surprisingly, most of the nutrient dense foods on earth are from animals.

Brad has teamed up with a group of scientists that believes we should all be eating more like our progenitors did…back when food was free from pesticides and humans used the entire animal for food and clothing.

*The Male Optimization Formula includes encapsulated freeze dried powdered animal organs which contain vitamins, minerals and amino acids which are otherwise difficult to process and use. Bear Grylls has signed on as an avid sponsor and supporter of these supplements, and there is both a male and female combination. 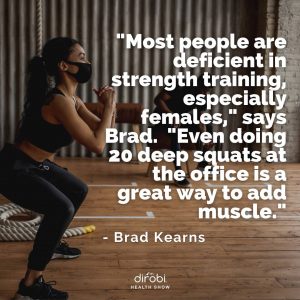 *Micro-sessions at the gym including weights have shown to improve muscle gain and reduce strength loss in as little as 1-5 minutes.

*High Intensity workouts are Brad’s favorites, even as he reaches his retirement years. High jumping, sprinting, and other short spurts of intensive muscle movement have tremendous benefits to longevity and health.

*Experts agree that the #1 factor of aging gracefully is the preservation of lean muscle mass throughout life. Strong organ function is directly correlated with muscle mass in all phases of life.

“Being competitive with yourself will help you measure and track your progress and have it mean something to you,” reminds Brad.

Dave reminds us that if you have to go back more than 5 years for a great memory, then you’re doing something wrong. We need to cherish our big wins, and our small ones, and keep improving until we learn that it’s all about enjoying the journey to the end.