Robert Sikes is a natural body-building competitor, keto expert, podcaster, vlogger, and all-around swell guy. His clients know he is one of the most knowledgeable people on the keto diet and performance athletics. He has seen spectacular results in himself and others and loves the ketogenic lifestyle. In fact, he hasn’t had a carbohydrate meal in over 6 years! Robert is committed to helping his clients optimize their performance with keto, whether that be in competitions or daily life! Click below to listen to the interview, or read on to see the highlights!

First, what is keto?

The keto diet is simply changing your body’s primary fuel source. On a traditional diet, you’re using carbohydrates and glucose for fuel. On a ketogenic diet, you’re using fat and ketones for fuel. It’s an evolutionary process that the body developed to survive during times of scarcity but you can do it from a nutritional standpoint by simply removing carbohydrates, sugars, and grains from your diet. Your body will adapt and learn how to leverage both the dietary fat you consume and also your stored body fat and use that as the primary fuel source.

What led you to the ketogenic diet?

I’ve been a natural bodybuilder for 12-13 years now and followed the traditional “bro-diet” for about 6 of those. I placed well at shows and earned several titles, but also developed multiple eating disorders after my first competition. I had bulked up a lot for my size, so I cut down and lost 80 pounds in 3 months. So I was very lean but it was not a healthy, sustainable lifestyle. I started looking for a healthier alternative and discovered keto.

At the time, ketogenic diets weren’t as popular as they are now. There weren’t articles, books, or any other resources. So I stumbled into it by accident and noticed that I was feeling and performing better without those carbohydrates. I was even able to earn my PRO-card status while following a ketogenic diet. Since then I’ve really dedicated my life and my business to bringing that knowledge forward and educating others on how to properly implement and optimize the ketogenic diet.

What do you typically eat in a day? 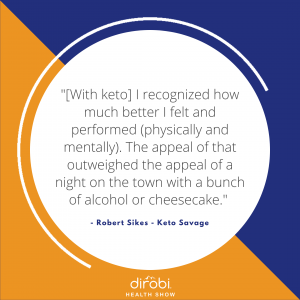 I’m trying to optimize for certain performance goals, so my diet looks different than others. Typically I have two meals a day. In the morning I have a “fatty coffee”, which is a cup of coffee with about 4 tablespoons of heavy cream, and I have a nootropic blend I mix in as well. It includes some MCT oil, lion’s mane mushrooms, Chaga mushrooms, etc. That will keep me sustained for a few hours until my first real meal. This consists of about 2 oz of liverwurst, a can of sardines, and one of my Keto Bricks- which are these 1,000 calorie ketogenic meal replacement bars that I’ve crafted. My second and final meal will be about a pound of 75/25 grass-fed beef with about 6 whole eggs and maybe a tablespoon or two of olive oil.

What if I have a spouse who isn’t on a keto diet?

With any type of dietary regimen where you’re trying to be disciplined, you’ll always have people that are trying to sabotage that. Often it’s not maliciously, but they want to go get a drink, overindulge in certain foods. I view everything in the context of, “What are my goals in life?” What are my nutritional, health, performance goals? I want to live my life in a way that aligns with my goals. With keto, I recognized how much better I felt and performed (physically and mentally). The appeal of that outweighed the appeal of a night on the town with a bunch of alcohol or cheesecake. There was no real temptation for me because I felt such a big difference. For people who have a spouse, for example, who isn’t on the same page the best thing you can do is live by example. Ideally, they will recognize how much better you feel and perform so they will support you, if not follow suit.

To start, I would remove everything in your house that doesn’t support the goals you have. So if you’re really serious about keto, you’ll want to remove all the Oreos and cupcakes from the cupboards. In the very beginning, keto was such an undercover diet. You had to get all of your nutrients from dense, whole, single-ingredient foods. I still recommend that when possible, however, now that keto is so popular there are a lot of manufactured products that align more with a regular diet. There are keto-friendly soft drinks and even Pop-Tarts. That’s not an optimal version of keto, but it’s definitely better than a regular Pop-Tart. 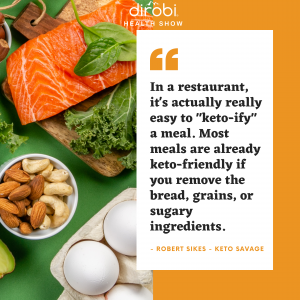 In a restaurant, it’s actually really easy to “keto-ify” a meal. An easy one is a burger- just remove the bun! You can have a burrito without the tortilla, or order a salad with meat on it. A lot of meals are keto-friendly once you remove the bread, grains, or sugary ingredients. Once you’re fat-adapted, you can even tolerate a little bit of alcohol. A glass of wine or a little whiskey won’t cause any issues.

What are some common difficulties people have when trying to adopt a keto lifestyle?

There’s so much information out there now, and too much of it is from “gurus” and “experts” that haven’t actually tried it or tested their theories. A lot of people are afraid of fat, so they try to create a low-fat version of keto. That’s like shooting yourself in the foot because your hormones won’t be optimized, so your own production of ketones isn’t going to be optimal. It’s important to remove any stigma you have around nutrition before starting.

Give it a few months on a tried-and-true keto diet to see how your body responds. That means high dietary fat, moderate protein, very low carbs, and ideally coming from whole-food sources. There are so many heavily-processed foods out there that aren’t doing anything for you, so scaling back to as natural as you can get is always going to be the best option. Often people will eat too little for too long, counting and cutting calories drastically for a long time. After a while there are no more calories to cut, leaving them in a chronically under-fed state which affects sleep, hormones, metabolism, and mood. Having a period of time where they are reverse-dieting and actually increasing their caloric intake to help regulate their metabolism and hormones will be really helpful. 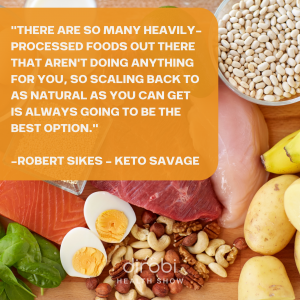 Tell me about your keto brick- I want one!

It was never intended to be a product at first. I was prepping for competition in 2017, and I needed a calorically-dense nutrition source that took the guesswork out of meal prep. There weren’t any keto products around at the time, so I started experimenting in the kitchen. I was trying to make something that would provide a lot of calories, dietary fat, a little protein, and minimal-to-no carbohydrates. At the same time, I needed something that wouldn’t make me bloat so I could eat it right before going on stage. I created what is now the Keto Brick- a 1,000 calorie bar (brick) that is perfectly in line with ketogenic macronutrients, shelf-stable, and won’t cause any bloat. I was documenting my training and prep on YouTube, and I kept getting messages asking where they could get one. My mom saw these comments and encouraged me to actually make it a product. My now-wife researched what we needed to do to comply with health-codes, and I researched how to manufacture a physical product. We scaled up from making them in our kitchen to a commercial kitchen space, and now we have multiple buildings so we can make them all in-house.

The base is always cow-butter, which provides excellent energy from a dietary fat standpoint. There’s a protein powder, MCT oil, and depending on the flavor you choose we might include nut butter, coconut, peanuts, almonds, and more. We designed it to have minimal ingredients, low carbohydrates, and high dietary fat. It’s very popular with backpackers too, because they provide so many nutrients without taking up very much space.