In this interview Dr. Michael Biamonte dives into a vexing and common ailment called Candida. But whether you suffer with Candida or not, this discussion will be worthwhile listen, as Dr. Biamonte is a leading nutritionist, listed in “The Directory of Distinguished Americans” for his research in Nutrition and Physiology. He is the founder of the Biamonte Center for Clinical Nutrition and is a co-creator of BioCybernetics, which is an unprecedented computer software program that is able to study blood work, mineral tests and many other lab tests to determine exactly where your body is imbalanced initially designed for aerospace purposes. As a practitioner for over 30 years, he is dedicated to improving the lives of his patients and helping them get back to living. 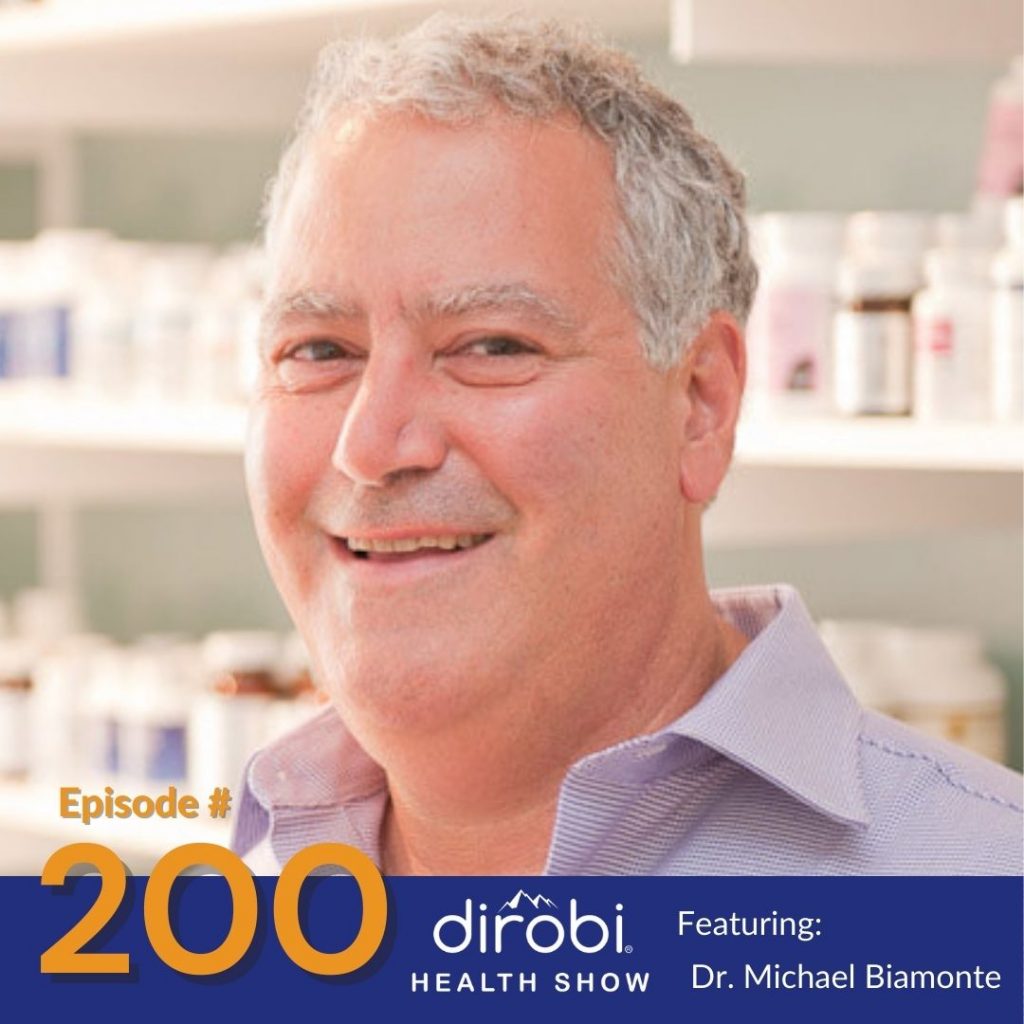 When I first got into naturopathic school in 1984 I began working with a group of independent researchers who were working for Grumman Aerospace on Long Island and their job was to build a computer software program where they could analyze the astronaut’s blood tests in order to determine what nutrients they would need while they were on the space station because you have problems when you’re in a zero gravity area for a long time.

It was through the use of that computer system that I became interested in Candida because we started to apply this computer system to different doctors and their private practices, including our practices because we were all individual practitioners, as well as being researchers for Grumman. We all had patients and we were using the computer on patients. Most of the patients would do really well. We would submit their tests and the computer would tell us the vitamins they needed and many of them had all these illnesses, but there was this 30% that had a bizarre reaction to the vitamins. They couldn’t tolerate them –it made them worse and they had crazy side effects. I volunteered to find out what was wrong with these people and eventually after a few years I found out that they had Candida. At the time I didn’t really know much about Candida and thought it was some flaky thing from California but when I really started to research it and saw how it affected humans, it all made sense.

I started to tell these people, “Go to your doctor and tell them you have Candida, have them cure you and we’ll put you back on the program.” When they did this the doctors had all kinds of responses and if they did know what it was the treatment wouldn’t work for them, so I decided I needed to figure that out, and here we are today.

** Prefer To Watch? Check Out Our Livestream, The Candida Chronicles and Natural Treatments with Dr. Michael Biamonte Here!**

Candida is a yeast or a fungus. It’s called a dimorphic organism. Technically it’s under the heading of michology which is the study of yeast or fungus. Candida can switch itself from a yeast structure to a fungi structure and it’s normal to find it in the body. Birds for instance have a very prominent level of candida and all mammals have it to different degrees. The problem is when it over grows.

About 30% of people are affected by candida and most people don’t know it. The problem is that you develop it typically from taking certain medications. It’s one of the most misdiagnosed issues we’ve ever had because medical doctors don’t really have the sense for it. I think one of the reasons why is because antibiotics cause the problem so doctors aren’t that receptive of it unfortunately. 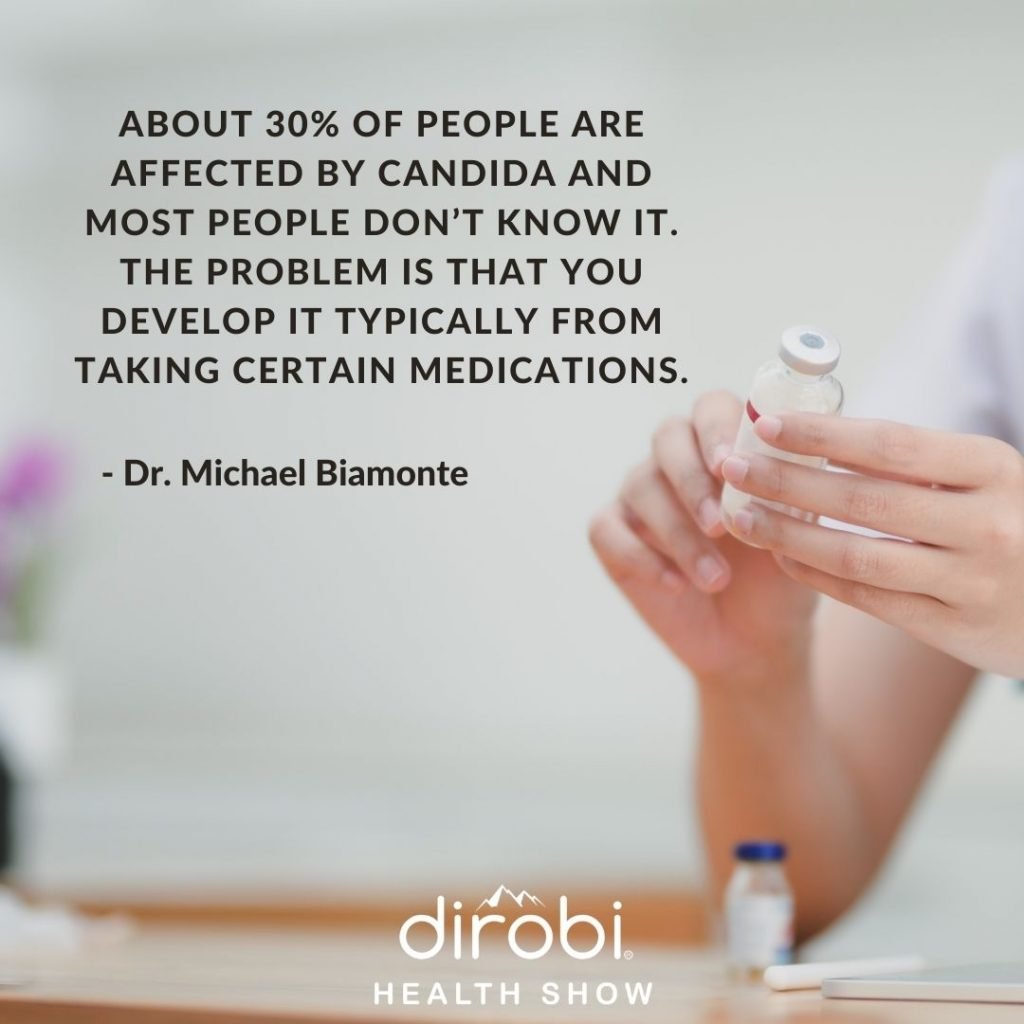 To treat Candida there’s a lot of attention that needs to be put on diet and lifestyle which the average doctor doesn’t have time to do.

How to Avoid It

How a person uses antibiotics. When you take antibiotics you want to make sure that it’s something that’s absolutely necessary and you want to take some type of antifungal at the same time. Most people think to take probiotics but that unfortunately doesn’t work because the antibiotic just kills the prebiotic.

Some other things that cause Candida are steroid medications, many hormones, and antacids.

Most doctors fail at treating this because there are certain logics in addressing and dealing with Candida that they haven’t grasped yet and really taken to a standard practice.

The people who are more prone to candida are people with a standard American diet. The Candida needs carbs and sugars to stay alive. If you starve it, it becomes more likely to dying when you hit it with the right treatment program.

Though, even if you went on a fast for 30 days, it could still stay alive because it would draw from your capillaries in your intestinal tract, drawing out your glucose. Diet and nutrition is good when it comes to managing it and helping it die but can not cure it alone.

It takes about 1 year to fully treat the Candida in a patient. We have different tests that we send out that patients can take to see if they have it and then come up with a customized plan according to the results and person.

There are 5 phases in the treatment process. Phase 0 involves removing some of the candida on the surface of your intestinal track through supplements. Phase 2 involves using natural & herbal substances, kill or eliminate candida from most of your body. The 3rd phase is cleansing the whole body of candida through a regimen of supplements & removing poisons from your system. The 4th phase uses blood & hair testing, identifying and correcting nutritional deficiencies through vitamins and diet changes. And, the last phase builds, repairs & stimulates your immune system to make sure it can keep candida in check.

In 1982 when I was going to naturopathic school, I was originally a musician. As I was learning all this new stuff about health I was also performing and I started getting tremors in my muscles which would affect my guitar playing. My friend who was a pianist was having the same problem and both of us at the time were vegans and had been for about 5 years.

I went to my teacher and told him about this and he told me, “I want you and your friend to eat liver every day for the next week and tell me how you feel.” After 3 days of eating liver all of our symptoms were gone. He assumed that we were blood type 0’s in which case being a vegetarian is the total opposite.

This is not only a testimony on how someone has helped me in my health journey but also in how the blood type diets really have a lot of truth to them.

Eat Right for Your Type Book

Examining Illness Through The Lens of Functional Medicine with Dr. Pucci